From October, I worked on designing and drawing skills for Gem Worlds. I think of the game as something like a cross between Boudler Dash and Hades: you dodge boulders, collect gems of different types, battle enemies, avoid enviornment-specific obstacles, and eventually escape through the portal. At the same time, you can pick from 21 different skills - a mix of active and passive - and enemies can use skills, too!

As a game designer, I hope the array of different skills will allow users to not only custom-pick the skills that best fit their personality and play-style, but also control the difficulty. In my previous game, Oneons, which I designed to be brutally hard, I added an optional heal skill in response to players complaining the game was too difficult; I hope that approach can work here, too.

The skills break down into two categories: active, and passive. Active skills require you to use them, and come in two variations: cooldown based (e.g. usable every 4 turns), and quantity based (e.g. only 4 uses per level). These include elemental attacks like fireball (area damage), freeze (stop monsters for a few turns) to time-bombs that explode after a few seconds.

Passive skills always take effect, all the time. These vary a great deal, ranging from the mundane Fireproof skill (which makes you invincible to explosions) to the game-changing Wall Walker skill (that lets you walk through walls) or the More Gems skill, which greatly increases the number of gems in a level (thus dropping the difficulty).

Second, I started working on the second (or third, not sure yet) world - a desert-themed world. I couldn't draw art good enough for it to be a "crystal desert," but I hope the monster art will bring that out. The video only shows the tiles and background; here are some monsters in various stages of design, from concept to final sprite: 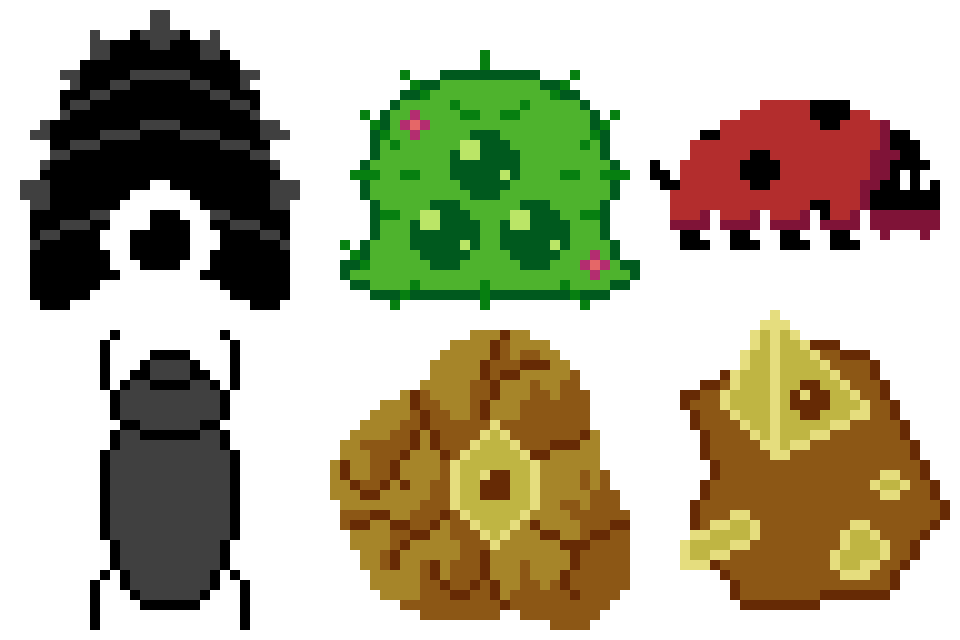 As I mentioned earlier, 21 skills, which is a lot. After the first world, which introduces the game mechanics to the player, monsters will start including their own skills - ranging from passive ones (like being explosion-proof or teleporting away if hit) to active ones that affect the player and environment in different ways.