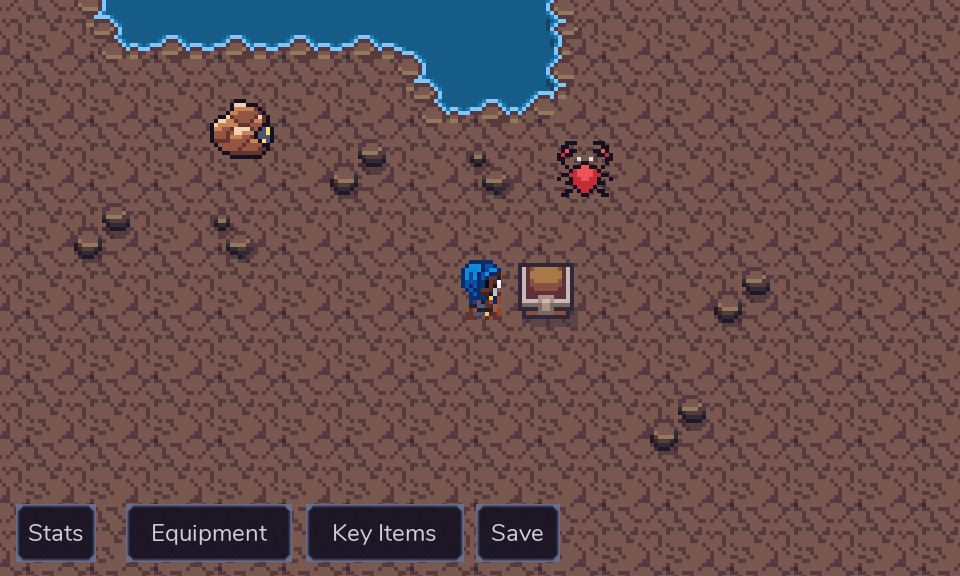 Welcome to the rather large retrospective on Eman Quest. Eman Quest, if you haven't heard about it, is a "procedurally-generated mini-RPG with memory mechanics." You can try the full game, for free, on Itch.

This retrospective covers two parts: first, the overall idea (what did I plan to achieve? What did I actually achieve? Reflections), and the key lessons learned (mostly specific to Godot).

The Overall Idea: A Procedurally-Generated RPG

I really like procedural content generation (in general), although it's deceptively difficult to implement correctly (corner cases really get you). I always wanted to make a "procedurally-generated Chrono Trigger-like RPG," although that's a huge undertaking; Eman Quest was the first step: creating a small, "lightweight" or "mini" RPG.

What, exactly, did I include in Eman Quest?

I didn't include many things in Eman Quest; specifically, I analyzed Bastion, how they cut corners to cut down on the amount of content they needed to complete the game, and applied it to my game. Specificially:

Overall, I am very happy with the result, and thankful that I could finish this project, although it doesn't come quite close to my initial vision (due to scope cuts and resource/time constraints).

Below, you can see the fan-art of the protagonist, Aisha.

As my first full Godot project, I'm not really proud of the code quality; as I joked on my Discord server, code quality decreases as you get closer to production! 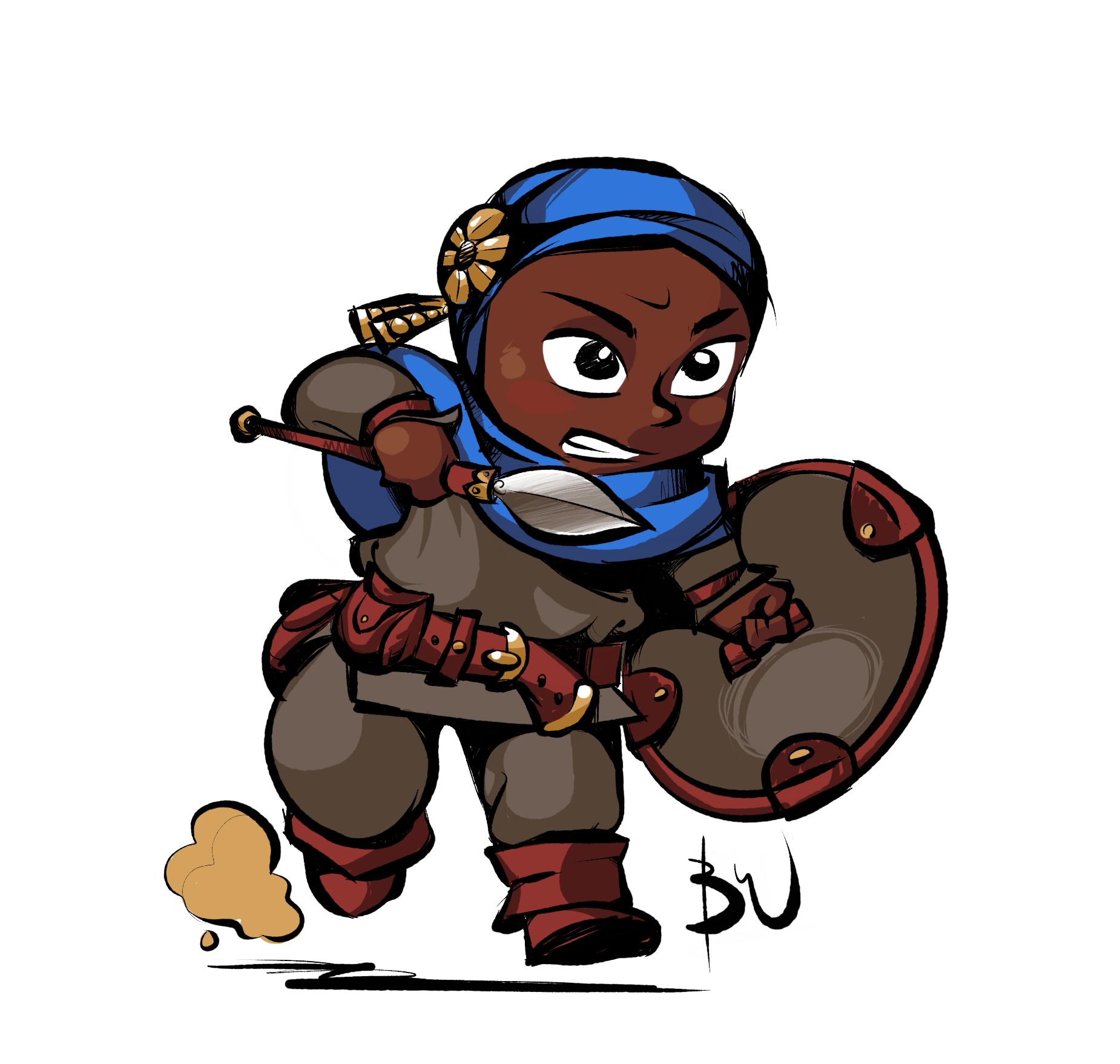 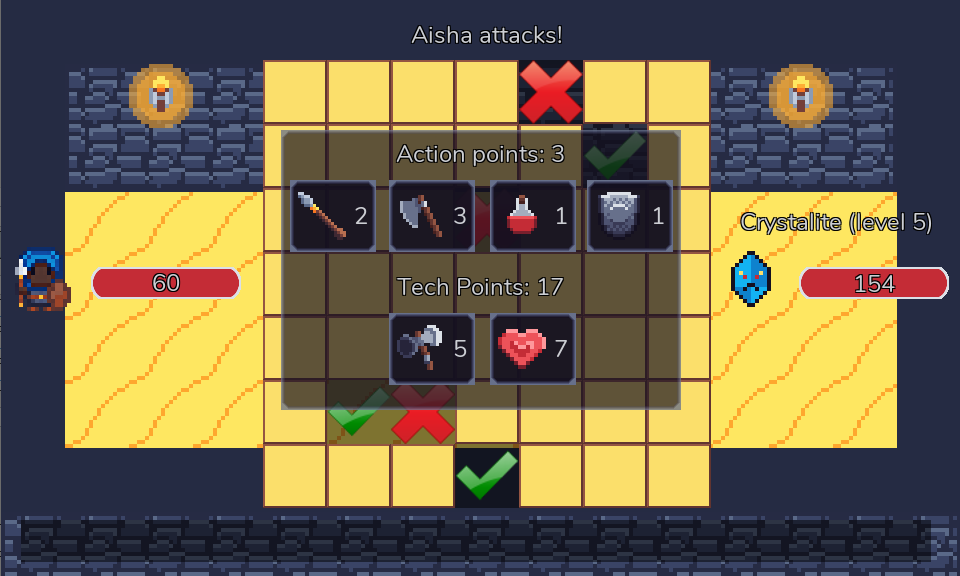 Aside from the technical challenge of creating a procedural RPG, I challenged myself to create a fun battle mechanic based on memory instead of reflexes or puzzles. I also received lots of good feedback about this from users, who praised the memory mechanic as interesting.

The core mechanic works simply: a 5x5 grid appears, some squares highlight for a fractional second, and then disappear. You need to click on those highlighted tiles to accumulate "action points," which you can use for different actions (attack costs 2, critical costs 3, and defend/heal costs 1).

In initial prototypes, I experimented with requiring players to pick both energy (action poinst) and actions they wanted to play. This proved to be quite "stressful," because you have a fractional second to look for both required energy tiles and action tiles; midway through development, I streamlined it into what it is now. I also tried several variations (incluiding a "simon says" type mini-game and a stream of "which of these items did you never see before"), both of which didn't seem fun enough to include in the final.

I also found that battles become somewhat rote and mechanical/deterministic after a while: you pick the five specified tiles, then pick crit, attack, and repeat, healing as necessary. To change it up, and to reward skillful play, I added techniques/skills and technical points.

Players who pick three or more tiles correctly in a row (with no mistakes) acquire tech points. If you select all five tiles correctly, you get a total of three tech points. You can save these up and use either five or seven for stun/vampire skills respectively. This adds an element of strategy and non-determinism. Tech poinst also persist across battles, adding another dimension of planning.

I initially planned one month to complete the project; it ended up taking around nine months. Why? Many reasons, including:

I ran into several difficulties along the way. These include:

The Game Crashed on Release

When I released the game, it crashed. A lot. This undoubtedly resulted in a terrible first-impression, although I received several supportive comments such as "it crashed once and then I reloaded and it was fine" or "it keeps crashing after battles but I completed the game."

Why did it crash, why didn't I notice, and how did I fix the crashes? Well, I'm glad you asked.

Godot runs the game in the editor, somewhat differently from when you export the final platform-specific release. This includes differences such as caring about case-sensitivity (which the Editor doesn't, on Windows), and - critically - crashing when you do Bad Things (like waiting for an event and disposing the scene before it comes back).

I always tested Eman Quest from within the editor, so I never noticed (or cared to notice?) the errors. The game also crashed on Linux and (troublingly) MacOS (which I don't have hardware to test with), but not on Windows, so I failed to catch it in my pre-release testing.

In the end, I upgraded Godot from 3.0.6 to 3.1.1 (someone commented that it didn't work with their graphics card, and 3.1.1 works with OpenGLES 3.1 and earlier), and the crashes disappeared. I also:

I learned several key lessons out of this. Learning about Godot itself proved invaluable; beyond that:

Finally, I want to personally thank everyone who helped me with the project - you know who you are. Without your help, coaching, support, and mentorship, I would never actually finished the game.