A Primer on AABB Collision Resolution

This blog post includes a discussion about AABB collision resolution: what it is and isn't, it's strengths and weaknesses, some common pitfalls, and how you can (hopefully) implement it in your low-level gaming tool of choice, if needed.

I learned all this (the second time) as part of adding fast/stable collision resolution to Puffin, a fast, lightweight 2D game engine built on top of MonoGame.

Some quick definitions to start:

My approach to AABB uses pre-collision resolution, because it tends to be less complex and more stable.

Pros and Cons of AABB

Why should you use AABB collision resolution? There are many other options, such as collision points, sphere/line collsion algorithms, polygons, etc.

The strengths of AABB include:

However, it includes some drawbacks:

If you can live with those limitations, I recommend AABB, primarily because it is computationally cheap (works well with a high number of colliding entities).

Read that again: it's often part of the physics engine. Physics engines are notoriously difficult to get right, and require lots of fiddling and corner-case evaluation. Even high-quality physics engines have limitations, such as tunneling.

It took me around 10 hours to discover all the caveats and get this to work right. And it works well, including with multi-entity collisions. Test thoroughly.

That said, my implementation includes a few bonus features:

With that out of the way, let's dive into the actual theory of how to make a stable AABB resolution, and then some code.

AABB collision resolution works by looking at the X and Y component resolutions of your velocity. Simply put: 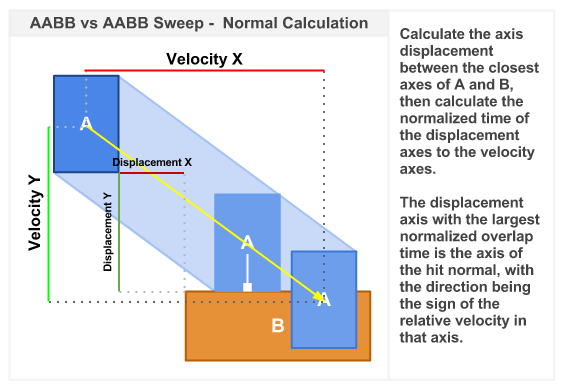 This excellent diagram (credit: LaroLaro on GameDev.SE) shows a moving object (A) that will collide with a second object (B). Based on the component velocities, you can see from the projected A box that the faster collision will be on the Y-axis first.

And Now, the Code

Below, I discuss some pseudocode that's almost the same as the actual (C#) code from Puffin. The same code can apply to any programming language or framework.

One unorthodox implementation detail I used: when each entity moves, I make a note of their "intended" destination X/Y. If that location would cause it to collide inside an object, I instead update it so it stops just at the point of collision. In my pseudocode below, you'll see this as intendedX and intendedY.

For every collidable entity, you're going to compare it to every other collidable entity. Since we're using AABBs, this is pretty simple: just compare the coordinates plus intended movement of the moving entity, against the entity that isn't moving:

Resolving collision based on collision time solves some corner-cases where an object is very close to collision on one axis, but moving much faster on the other axis (eg. a player falling off a tall building moves into it, and instead of colliding against the side, he collides with the top).

Finally, the most complex case: what do we do if the object would collide on both X- and Y-axes? We resolve the fastest collision first:

Easy! If it would take 0.1s to collide on the X-axis, and 0.2 on the Y-axis, we increment the entity's X and Y by their velocity times 0.1 (the faster collision time).

Finally, for stable resolutions, make sure you run the collision resolution twice per update. Since MonoGame-based frameworks give you the update time, simply run the update twice, with half of the elapsed time, each update:

With basic collision resolution out of the way, you might ask "how do I slide up against the target object instead of simply stopping abruptly?"

The answer to that caused about 50% of my development time. The answer is "you collide as usual but then move on the other axis as much as is reasonable," where reasonable means "don't move so much you collide with something else." In this case, don't slide if doing so would land you in another AABB collision.

Another complication I can't explain well is my need to refer to the "old" intended X/Y distances; I'm not 100% sure at this moment why I needed those, but those are needed for a proper resolution.

Wrapping it All Up

That concludes a somewhat whirlwind tour of AABB collision detection. I hope you came out of it understanding the pros and cons, how to assess when you need it or not, and enough pseudo-code to actually get it working for you.

I would love to hear from you! If you have any feedback, please drop me a message/tweet on Twitter.